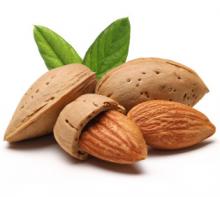 Although nuts are known to provide a variety of cardio-protective benefits, many avoid them for fear of weight gain. A prospective study published in the journal Obesity shows such fears are groundless. In fact, people who ate nuts at least twice a week were much less likely to gain weight than those who almost never ate nuts.
The 28-month study involving 8,865 adult men and women in Spain, found that participants who ate nuts at least two times per week were 31% less likely to gain weight than were participants who never or almost never ate nuts.

And, among the study participants who gained weight, those who never or almost never ate nuts gained more (an average of 424 g more) than those who ate nuts at least twice weekly. Study authors concluded, "Frequent nut consumption was associated with a reduced risk of weight gain (5 kg or more). These results support the recommendation of nut consumption as an important component of a cardio-protective diet and also allay fears of possible weight gain."

If you've been reluctant to add almonds to your diet because of their high calorie count, a study published in the British Journal of Nutrition may help convince you to give these delicious, nutrient-dense nuts a try. In this study, the normal eating patterns of 43 men and 38 women were followed for 6 months. Then they were told to eat approximately 2 ounces or one-quarter cup of almonds daily but were given no other instructions about changing their diet, and followed for an additional 6 months. By the end of the study, a number of very beneficial changes were seen to naturally occur.

Almonds are a very good source of manganese and a good source of copper, two trace minerals that are essential cofactors of a key oxidative enzyme called superoxide dismutase. Superoxide dismutase disarms free radicals produced within the mitochondria (the energy production factories within our cells), thus keeping our energy flowing. Fortunately, Mother Nature supplies both mineral cofactors in almonds. Just one-quarter cup of almonds supplies 45.0% of the daily value for manganese, and 20.0% of the daily value for copper. Riboflavin (vitamin B2) also plays at least two important roles in the body's energy production. When active in energy production pathways, riboflavin takes the form of flavone adenine dinucleotide (FAD) or flavone mononucleotide (FMN). In these forms, riboflavin attaches to protein enzymes called flavoproteins that allow oxygen-based energy production to occur.

Flavoproteins are found throughout the body, particularly in locations where oxygen-based energy production is constantly needed, such as the heart and other muscles. Riboflavin's other role in energy production is protective. The oxygen-containing molecules the body uses to produce energy can be highly reactive and can inadvertently cause damage to the mitochondria and even the cells themselves. In the mitochondria, such damage is largely prevented by a small, protein-like molecule calledglutathione. Like many "antioxidant" molecules, glutathione must be constantly recycled, and it is vitamin B2 that allows this recycling to take place. (Technically, vitamin B2 is a cofactor for the enzyme glutathione reductase that reduces the oxidized form of glutathione back to its reduced version.) That same one-quarter cup of almonds will supply your cells with 17.6% of the daily value for riboflavin. Twenty years of dietary data collected on over 80,000 women from the Nurses' Health Study shows that women who eat least 1 ounce of nuts, peanuts or peanut butter each week have a 25% lower risk of developing gallstones. Since 1 ounce is only 28.6 nuts or about 2 tablespoons of nut butter, preventing gallbladder disease may be as easy as having a handful of almonds as an afternoon pick me up, tossing some almonds on your oatmeal or salad or packing one almond butter and jelly sandwich (be sure to use whole wheat bread for its fiber, vitamins and minerals) for lunch each week. Almonds are concentrated in protein. A quarter-cup contains 7.62 grams—more protein than is provided by the typical egg, which contains 5.54 grams. As noted in the world’s healthiest foods.