The Benefit of Walnuts 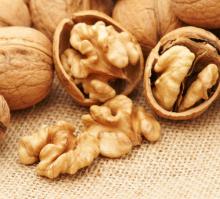 We have long learned how nuts can benefit our overall health. Many studies have been done to show us how just a handful a day can help keep the doctor away in so many areas of our health and well-being. Let’s take a look at why walnuts may be the most powerful of all the nuts for impacting our overall health from everything to heart disease to reversing the clock on aging.

No aspect of walnuts has been better evaluated in the research than their benefits for the heart and circulatory system. Some review studies have emphasized the very favorable impact of walnuts on "vascular reactivity," namely, the ability of our blood vessels to respond to various stimuli in a healthy manner. In order to respond to different stimuli in a healthy way, many aspects of our cardiovascular system must be functioning optimally. These aspects include: ample presence of antioxidant and anti-inflammatory nutrients, proper blood composition, correct balance in inflammation-regulating molecules, and proper composition and flexibility in our blood vessel walls. Researchers have determined the ability of walnuts to have a favorable impact on all of these aspects. The chart below summarizes some key research findings about walnuts and heart health:

Research on the blood pressure benefits of walnuts has been mixed. We suspect that these mixed results are related to the surprising differences in mineral composition amongst different varieties of walnuts. Researchers have long been aware of the relationship between healthy blood pressure and intake of specific minerals, including potassium, calcium, and magnesium. In multiple studies, these minerals have a much greater impact on blood pressure than the mineral sodium (familiar to most people in its sodium chloride form, i.e., everyday table salt). We've seen studies showing the following ranges for key blood pressure-regulating minerals in walnuts. Even though there are valuable amounts of these blood pressure-regulating minerals in virtually all varieties of walnuts, the ranges above may help explain why some studies have shown statistically significant benefits from walnuts on blood pressure while others have not.

Not in question with respect to walnuts and cardiovascular support is their reliable omega-3 content. Adequate intake of omega-3s, including the alpha-linolenic acid (ALA) present in walnuts, has repeatedly been shown to help improve a wide variety of cardiovascular functions, including blood pressure. In at least one research study, adults have been able to significantly increase their blood level of ALA with as few as 4 walnuts per day.

In the United States, as many as 1 in 4 adults may be eligible for diagnosis with Metabolic Syndrome (MetS). MetS isn't so much a "disease" as a constellation of problematic and overlapping metabolic problems including excessive blood fats (triglycerides), high blood pressure, inadequate HDL cholesterol, and obesity (as measured by waist circumference, and/or body mass index). Recent studies have shown that approximately one ounce of walnuts daily over a period of 2-3 months can help reduce several of these MetS-related problems. In addition, addition of walnuts to participant diets has also been shown to decrease "abdominal adiposity"—the technical term for the depositing of fat around the mid-section. Importantly, the MetS benefits of added walnuts have been achieved without causing weight gain in any the studies we've seen to date.

Given the wide variety antioxidant and anti-inflammatory nutrients found in walnuts, it's not surprising to see research on this tree nut showing measurable anti-cancer benefits. The antioxidant properties of walnuts help lower risk of chronic oxidative stress, and the anti-inflammatory properties help lower risk of chronic inflammation, and it is precisely these two types of risk, that, when combined, pose the greatest threat for cancer development. Prostate cancer and breast cancer are the best-studied types of cancer with respect to walnut intake, and their risk has been found to be reduced by fairly large amounts of walnut consumption. (Large in this case means approximately 3 ounces per day.) For prostate cancer, the evidence is somewhat stronger, and more studies have involved human subjects. For breast cancer, most of the evidence has been based on studies of rats and mice.

The anti-inflammatory nutrients in walnuts may play a special role in support of bone health. A recent study has shown that large amounts of walnuts decrease blood levels of N-telopeptides of type 1 collagen (NTx). These collagen components provide a good indicator of bone turnover, and their decreased blood level in response to walnut intake is an indication of better bone stability and less mineral loss from the bone. "Large amounts" of walnuts (in this study, actually raw walnuts plus walnut oil) translated into 50% of total dietary fat. In an everyday diet that provided 2,000 calories and 30% of those calories from fat, this 50% standard for walnuts would mean about 67 grams of fat from walnuts or 4 ounces of this tree nut on a daily basis. While this amount is more than would most people would ordinarily consume, we expect the health benefits of walnuts for bone health to be demonstrated in future studies at substantially lower levels of intake.

Walnuts have also produced a good track record in the research as a desirable food for support of weight loss and for prevention of obesity. That finding often surprises people because they think of high-fat, high-calorie foods as a primary contributing factor to obesity and to weight gain. In general, overconsumption of high-fat, high-calorie foods is a primary contributing factor to obesity and weight gain. However, obesity has also been clearly identified by researchers as involving chronic, unwanted inflammation. As discussed earlier in this Health Benefits section and throughout this walnuts' profile, walnuts are unique in their collection of anti-inflammatory nutrients. These nutrients include omega-3 fatty acids; phytonutrients including tannins, phenolic acids, and flavonoids; quinones like juglone; and other anti-inflammatory phytonutrients. These anti-inflammatory benefits can overshadow the high-calorie and high-fat risk posed by walnuts, and that's exactly what they have done in an increasing number of research studies involving risk and/or treatment of obesity. While it is definitely possible to overconsume walnuts, most everyday diets could remain correctly balanced in terms of calories and fat while still including fairly generous amounts of walnuts (in the range of 1-3 ounces). A limited (but increasing) number of studies have shown potential health benefits for walnuts in the area of memory and general thought processes (often referred to as "cognitive" processes). Thus far, most of the initial research in this area has involved rats and mice, but we expect to see cognitive benefits of walnuts for humans becoming a topic of increasing research interest.

A final fascinating aspect of walnuts and their potential health benefits involves melatonin (MLT). MLT is a widely-active messaging molecule in our nervous system, and very hormone-like in its regulatory properties. MLT is critical in the regulation of sleep, daily (circadian) rhythms, light-dark adjustment, and other processes. It has also been found to be naturally occurring within walnuts. Average melatonin (MLT) content of walnuts is approximately 3.6 nanograms (ng) per gram (g), or 102ng/ounce. Other commonly eaten foods—for example, cherries—have also been found to measurable amounts of MLT. Researchers are not yet sure how everyday intake of MLT from walnuts is involved in our health, but several study authors have hypothesized about the MLT in walnuts as playing an important role (along with other walnut nutrients) in the anti-cancer benefits of this unusual food. As noted in the world’s healthiest foods.

Walnuts contain many healing properties to support our health. Just 1-2oz per day is enough to create a positive impact in our health.