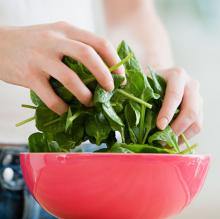 When I was little I used to watch one the classic cartoon characters make himself super strong by eating this essential vegetable, but you may be surprised to learn that he may also have been helping to protect himself against inflammatory problems, oxidative stress-related problems, cardiovascular problems, bone problems, and cancers at the same time.

Even though virtually all vegetables contain a wide variety of phytonutrients—including flavonoids and carotenoids—this super vegetable can claim a special place among vegetables in terms of its phytonutrient content. Researchers have identified more than a dozen different flavonoid compounds in spinach that function as anti-inflammatory and anti-cancer agents. (Some of these substances fall into a technical category of flavonoids known as methylenedioxyflavonol glucuronides.) The anticancer properties of these spinach flavonoids have been sufficiently impressive to prompt researchers to create specialized spinach extracts that could be used in controlled laboratory studies. These spinach extracts have been shown to slow down cell division in human stomach cancer cells (gastric adenocarcinomas), and in studies on laboratory animals, to reduce skin cancers (skin papillomas). A study on adult women living in New England in the late 1980s also showed intake of spinach to be inversely related to incidence of breast cancer.

Excessive inflammation, of course, typically emerges as a risk factor for increased cancer risk. (That's why many anti-inflammatory nutrients can also be shown to have anti-cancer properties.) But even when unrelated to cancer, excessive inflammation has been shown to be less likely following consumption of spinach. Particularly in the digestive tract, reduced inflammation has been associated not only with the flavonoids found in spinach, but also with its carotenoids. Neoxanthin and violaxanthin are two anti-inflammatory epoxyxanthophylls that are found in plentiful amounts in the leaves of spinach. While these unique carotenoids may not be as readily absorbed as carotenoids like beta-carotene or lutein, they still play an important role in regulation of inflammation and are present in unusual amounts in spinach.

Most of the flavonoid and carotenoid nutrients found in spinach that provide anti-inflammatory benefits provide antioxidant benefits as well. Given the fact that spinach is an excellent source of other antioxidant nutrients — including vitamin C, vitamin E, vitamin A (in the form of carotenoids), and manganese —as well as a very good source of the antioxidant zinc and a good source of the antioxidant selenium—it's no wonder that spinach helps lower risk of numerous health problems related to oxidative stress. Our blood vessels, for example, are especially susceptible to damage from oxidative stress, and intake of spinach has been associated with decreased risk of several blood vessel-related problems, including atherosclerosis and high blood pressure. Two of the carotenoids that are especially plentiful in spinach — lutein and zeaxanthin — are primary antioxidants in several regions of the eye, including the retina and the macula. Although we haven't seen specific studies on spinach intake and prevention of eye-related problems like macular degeneration, we have seen studies showing that human blood levels of lutein can be increased by consumption of spinach in everyday amounts. We've also seen at least one group of researchers suggesting that spinach has a likely role to play in prevention of eye problems, including age-related macular degeneration.

The wealth of vitamin K provided by spinach is important for maintaining bone health. Vitamin K1 helps prevent excessive activation of osteoclasts, the cells that break down bone. Additionally, friendly bacteria in our intestines convert vitamin K1 into vitamin K2, which activates osteocalcin, the major non-collagen protein in bone. Osteocalcin anchors calcium molecules inside of the bone. All of these vitamin K-related mechanisms point to the importance of vitamin K-rich foods for bone health, and it is difficult to find vegetables that are richer in vitamin K than spinach. Spinach is also an excellent source of other bone-supportive nutrients including calcium and magnesium.

So while spinach probably won't make you super strong the minute you eat it as it did for Popeye, it will promote your health and vitality in many other ways. It seems like Popeye was pretty smart after all. *As noted in the world's healthiest foods