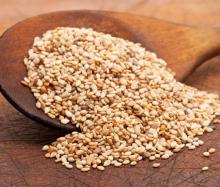 New research found on these popular seeds are found to pack a powerful punch in the health category. They may be one of the best sources of minerals in all of the nuts and seeds. Look at some of the amazing benefits of what these seeds can bring to your health. Not only can they help with reducing inflammation, they also can increase the overall immune system.Sesame are also a good source of calcium, magnesium, iron, phosphorus, vitamin B1, zinc, molybdenum, selenium, and dietary fiber. In addition to these important nutrients, sesame seeds contain two unique substances: sesamin and sesamolin. Both of these substances belong to a group of special beneficial fibers called lignans, and have been shown to have a cholesterol-lowering effect in humans, and to prevent high blood pressure and increase vitamin E supplies in animals. Sesamin has also been found to protect the liver from oxidative damage.

Sesame seeds are an excellent source of copper, a very good source of manganese, and a good source of magnesium, calcium, phosphorus, iron, zinc, molybdenum, and selenium. This rich assortment of minerals translates into the following health benefits:

Copper is known for its use in reducing some of the pain and swelling of rheumatoid arthritis. Copper's effectiveness is due to the fact that this trace mineral is important in a number of antiinflammatory and antioxidant enzyme systems. In addition, copper plays an important role in the activity of lysyl oxidase, an enzyme needed for the cross-linking of collagen and elastin—the ground substances that provide structure, strength and elasticity in blood vessels, bones and joints.
Studies have supported magnesium's usefulness in:

In recent studies, calcium has been shown to:

There is a little bit of controversy about sesame seeds and calcium, because there is a substantial difference between the calcium content of hulled versus unhulled sesame seeds. When the hulls remain on the seeds, one tablespoon of sesame seeds will contains about 88 milligrams of calcium. When the hulls are removed, this same tablespoon will contain about 37 milligrams (about 60% less). Tahini—a spreadable paste made from ground sesame seeds—is usually made from hulled seeds (seeds with the hulls removed, called kernels), and so it will usually contain this lower amount of calcium.

The term "sesame butter" can sometimes refer to tahini made from sesame seed kernels, or it can also be used to mean a seed paste made from whole sesame seeds—hull included. Although the seed hulls provide an additional 51 milligrams of calcium per tablespoon of seeds, the calcium found in the hulls appears in large part to be found in the form of calcium oxalate. This form of calcium is different than the form found in the kernels, and it is a less absorbable form of calcium. So even though a person would be likely to get more calcium from sesame seeds or sesame seed butter that contained the hulls, there is a question about how much more calcium would be involved. It would defintely be less than the 51 additional milligrams found in the seed hulls. And there would also, of course, be a question about the place of hull-containing sesame seeds on an oxalate-restricted diet.

Another reason for older men to make zinc-rich foods such as sesame seeds a regular part of their healthy way of eating is bone mineral density. Although osteoporosis is often thought to be a disease for which postmenopausal women are at highest risk, it is also a potential problem for older men. Almost 30% of hip fractures occur in men, and 1 in 8 men over age 50 will have an osteoporotic fracture. A study of 396 men ranging in age from 45-92 that was published in the American Journal of Clinical Nutrition found a clear correlation between low dietary intake of zinc, low blood levels of the trace mineral, and osteoporosis at the hip and spine.

Phytosterols are compounds found in plants that have a chemical structure very similar to cholesterol, and when present in the diet in sufficient amounts, are believed to reduce blood levels of cholesterol, enhance the immune response and decrease risk of certain cancers.
Phytosterols beneficial effects are so dramatic that they have been extracted from soybean, corn, and pine tree oil and added to processed foods, such as "butter"-replacement spreads, which are then touted as cholesterol-lowering "foods." But why settle for an imitation "butter" when Mother Nature's nuts and seeds are a naturally rich source of phytosterols—and cardio-protective fiber, minerals and healthy fats as well?

In a study in the Journal of Agricultural and Food Chemistry, researchers published the amounts of phytosterols present in nuts and seeds commonly eaten in the United States. Sesame seeds had the highest total phytosterol content (400-413 mg per 100 grams), and English walnuts and Brazil nuts the lowest (113 mg/100grams and 95 mg/100 grams). (100 grams is equivalent to 3.5 ounces.) Of the nuts and seeds typically consumed as snack foods, pistachios and sunflower seeds were richest in phytosterols (270-289 mg/100 g), followed by pumpkin seeds (265 mg/100 g). *As noted in the world’s healthiest foods.

As you can see sesame seeds are a powerful superfood that can improve your health in many ways. Just a handful a day can bring great value to your health and well-being. This is one of our favorite alternatives nut butter spreads as well.