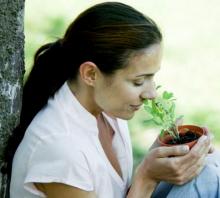 Brain health is becoming a common buzzword for everyone. Staying mentally sharp through the years is as important as staying physically sharp. One of the greatest tools that we have is our natural whole foods that can help us improve overall cognition, memory, and focus. There is a food that has been used for centuries to help improve brain function. It contains some powerful ingredients that will support, nourish, and even help turn back the clock. This superfood for our brain is known as sage. Its been known through time that sage has many natural healing properties. Like rosemary, its sister herb in the mint (Labitae) family, sage contains a variety of volatile oils, flavonoids (including apigenin, diosmetin, and luteolin), and phenolic acids, including the phenolic acid named after rosemary—rosmarinic acid.

Rosmarinic acid can be readily absorbed from the GI tract, and once inside the body, acts to reduce inflammatory responses by altering the concentrations of inflammatory messaging molecules (like leukotriene B4). The rosmarinic acid in sage and rosemary also functions as a powerful antioxidant. The leaves and stems of the sage plant also contain antioxidant enzymes, including SOD (superoxide dismutase) and peroxidase. When combined, these three components of sage—flavonoids, phenolic acids, and oxygen-handling enzymes—give it a unique capacity for stabilizing oxygen-related metabolism and preventing oxygen-based damage to the cells. Increased intake of sage as a seasoning in food is recommended for persons with inflammatory conditions (like rheumatoid arthritis),as well as bronchial asthma, and atherosclerosis. The ability of sage to protect oils from oxidation has also led some companies to experiment with sage as a natural antioxidant additive to cooking oils that can extend shelf life and help avoid rancidity.

Want some sage advice? Boost your wisdom quotient by liberally adding sage to your favorite soups, stews and casserole recipes. Research published in the June 2003 issue of Pharmacological Biochemical Behavior confirms what herbalists have long known: sage is an outstanding memory enhancer. In this placebo-controlled, double-blind, crossover study, two trials were conducted using a total of 45 young adult volunteers. Participants were given either placebo or a standardized essential oil extract of sage in doses ranging from 50 to 150 microls. Cognitive tests were then conducted 1, 2, 4, 5, and 6 hours afterwards. In both trials, even the 50 microl dose of sage significantly improved subjects' immediate recall.

In other research presented at the British Pharmaceutical Conference in Harrogate (September 15-17, 2003), Professor Peter Houghton from King's College provided data showing that the dried root of Salvia miltiorrhiza, also known as Danshen or Chinese sage, contains active compounds similar to those developed into modern drugs used to treat Alzheimer's Disease. Sage has been used in the treatment of cerebrovascular disease for over one thousand years. Four compounds isolated from an extract from the root of Chinese sage were found to be acetylcholinesterase (AChE) inhibitors. The memory loss characteristic of Alzheimer's disease is accompanied by an increase of AChE activity that leads to its depletion from both cholinergic and noncholinergic neurons of the brain. Amyloid beta-protein (A beta), the major component of amyloid plaques which form in the brain in Alzeeimer's disease, acts on the expression of AChE, and AChE activity is increased around amyloid plaques. By inhibiting this increase in AChE activity, sage provides a useful therapeutic option to the use of pharmaceutical AChE inhibitors. *As noted in the worlds healthiest foods.

These powerful foods are used for empowering your health.